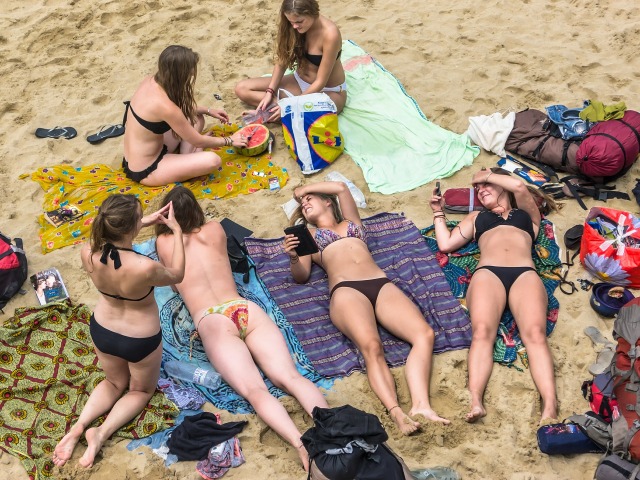 I was on the Jon Gaunt show speaking to Nick Margerrison  about International Women’s Day. There were loads of marches happening. The rally in South America was the most credible. The femicide rate (murder of women) has been on the upswing there, increasing 78% over the past six years.  “Honour killings” average out at one female murdered every 30 hours.

Further north a bookstore in Cleveland, Ohio made a protest of another sort. Theirs was to turn around each volume on their shelves by a male writer. It’s their call, their shop. But while in the spirit of promoting female authorship, I wonder whether this kind of remonstration doesn’t build more opposition to IWD.

Each year, particularly on 8th March, due to the sight of mass street pickets the collective concept of “sisterhood” is debated and challenged. Can we have for example a feminist movement without promoting the idea of women as a homogenous group?

The natural explanation for the need for female to female bonding is survival. Oxytocin (produced when people cuddle up or bond socially) is a also secreted by humans in reaction to fear. In females, it buffers the fight or flight response and encourages them to protect and nurture their children and to gather with other women.

So, roughly speaking, it’s all related to pressure, how much you require the resources of the female pack.  Or the amount of physical danger you perceive yourself to be in.

But is bonding the only basis of “Sisterhood”?

Bearing in mind that the term was popularised in the late 1960s when second wave feminism was at its most influential, is it now redundant?  There was a very special reason for it at the time. Up until then, domestic violence was largely ignored.  Feminists of the day came to the rescue of battered wives by establishing refuges and shelters. It was there that circles of victims would collect together to share similar experiences of their trauma as a form of therapy. Linked to abusive husbands, the designation of “sisterhood” as a term took on a distinctly anti-male connotation.

Additionally,  “sisterhood” still conjures the image of an all female circle dancing naked in the wood and women’s marches. There’s nothing which depicts nurturing less than vulgarity in the street and gobby girl gangs. Under even the briefest of scrutiny, the concept of all girls together hugging each other strikes as false. For example, what happened to rivalry?

While male competition involves just about everything in a general fashion, the female equivalent (girl on girl) is far more personal.  Simply put, more savage than silly.

But this bonding between doesn’t only occur in times of trial. It’s a practical, pleasant and civilised aspect of any society.

Let’s not pretend that women will support a woman instead of a  man if it means risking heavyweight stuff like homes, husbands or families.  Or even jobs and careers for that matter.

But nurturing is a vital lady skill developed and passed on as the essential core of female culture. For that reason, we will always have a strong need for a sisterhood of sorts.

More of this in my book Moderating Feminism

Writer and social critic
View all posts by Louise Burfitt-Dons →
This entry was posted in feminism, Politics. Bookmark the permalink.